Scientists have found that low doses of methamphetamine facilitate the caveolar transport of other substances through the blood-brain barrier. This applies to both small molecules and proteins, which means that methamphetamine can become a universal auxiliary substance for drug delivery to the central nervous system. The authors of the article, a preprint of which is available on the bioRxiv portal (Chang et al., Methamphetamine enhances caveolar transport of therapeutic drugs across the rodent blood-brain barrier), tested methamphetamine as an adjunct to chemotherapy for the treatment of a glioblastoma model in mice, and the animals lived longer.

The central nervous system is separated from the blood vessels by a blood-brain barrier, which prevents "foreign" substances from entering the brain. What to let in and what not to let in is decided by endothelial cells, which form a physical barrier, and in order to deliver drugs to the brain, scientists are trying to deceive them.

One of the proposed ways to "drag" drugs through the blood–brain barrier is with the help of methamphetamine. This narcotic substance in a concentration of more than ten micromoles per liter disrupts (sometimes irreversibly) tight contacts between endothelial cells, and gaps appear in the barrier. In small doses, methamphetamine also increases the conductivity of the blood-brain barrier, but not by physically violating it, but by increasing the vesicular transport of fluids through cells.

Scientists from Great Britain and Ireland led by Patrick Turowski from University College London investigated the mechanism of methamphetamine's effect on the blood-brain barrier. To do this, an ex vivo model of rodent brain perfusion was created – catheters were inserted into the carotid arteries of animals immediately after death, and the jugular veins were cut off. Solutions were passed through the brain through catheters, which preserved the integrity of the vascular network and the blood-brain barrier. Methamphetamine was added to the solution, which was injected through one of the catheters, and the second served as a control.

To begin with, we were convinced of the integrity of the blood–brain barrier - for this purpose, a dye was injected into the carotid arteries of rats, which normally does not pass through the barrier. Then methamphetamine was added to one of the two solutions at a concentration of one micromole per liter. After 60 minutes, the vascular network was washed so that the dye remained only where it passed through the blood-brain barrier. 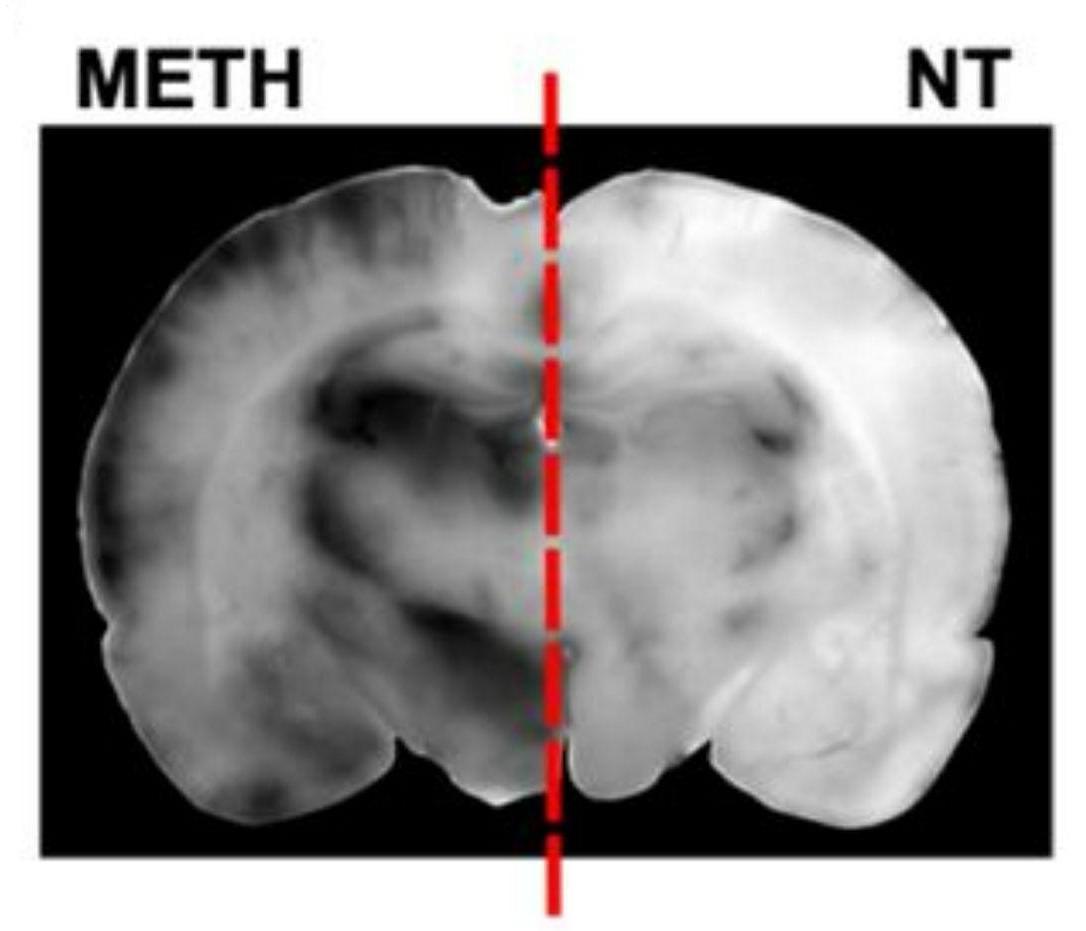 In the hemisphere into which methamphetamine was injected, the dye penetrated the blood-brain barrier and stained the brain. Drawings from the article in bioRxiv.

In the hemisphere through which the methamphetamine solution was passed, the dye passed through the barrier and accumulated in the brain, but in the second (control) hemisphere this did not happen. Using electron microscopy, it was found that the processes of astrocytes after exposure to methamphetamine increased in size and compressed the capillaries. Tight contacts between endothelial cells were preserved, and the dye did not accumulate in them, but there were many vesicles with dye inside these cells.

Vesicles with dye in the rat endothelium resembled caveoles (membrane intakes), and the researchers suggested that the dye passed through the blood-brain barrier using caveolar endocytosis. To test this, the experiment was repeated with mice without the caveolin gene Cav1, which do not have caveols – in these animals, the dye did not penetrate the blood-brain barrier. Scientists have concluded that methamphetamine facilitates the caveolar transport of substances through the endothelium.

Methamphetamine helped not only dyes to pass through the blood–brain barrier - also, together with the drug, small molecules of doxorubicin, which is used in chemotherapy of malignant tumors, and a recombinant protein with antitumor effect aflibercept weighing about one hundred kilodaltons, got into the brain. 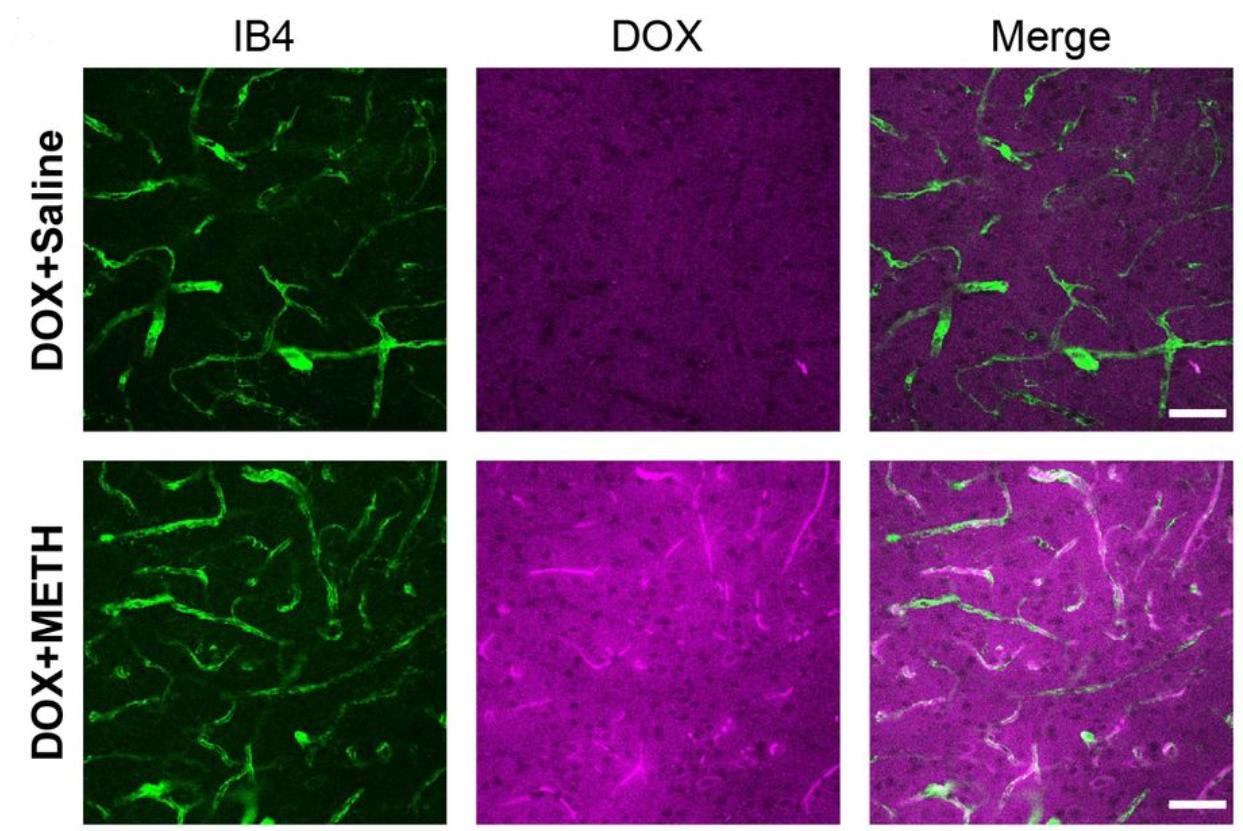 A section of the rat thalamus into which only doxorubicin (top) or doxorubicin and methamphetamine (bottom) were injected. Green – capillary network, pink – doxorubicin.

Finally, the effect of methamphetamine on the permeability of the blood-brain barrier was studied in vivo. Mice with a glioblastoma model (with human tumor cells) were injected with doxorubicin with methamphetamine, and the control group was given only the drug. The dose was calculated so that the concentration of the drug in the blood was about one micromole per liter.

Animals that were injected with methamphetamine with the drug lived 25 percent longer (18 versus 22.5 days after the injection of tumor cells), although the weight in both groups decreased equally. So, methamphetamine did not improve the health of mice in general, but helped doxorubicin to penetrate the tumor.

The authors note that methamphetamine is safe and approved The U.S. Food and Drug Administration for the treatment of attention deficit hyperactivity disorder and obesity (although it is worth noting that in The substance is prohibited in Russia), which means that it can be quickly introduced into clinical practice as a universal auxiliary substance.