Tissue engineering has been around for many years, tissues and organs are grown with varying success in laboratories around the world. As a rule, scaffolds are used in their creation – three-dimensional biodegradable matrices that serve as a support and support the architecture of the future organ or tissue that is seeded with cells.

But scaffolds also cause bioengineers a lot of trouble: they must decompose after a certain time in order to disappear by the maturation of the organ, not earlier and not later. This time is quite difficult to calculate, and the by-products of decomposition can be toxic. Scaffolds also prevent the development of intercellular connections, which are important for the formation of functioning tissues.

A research team from the University of Illinois, Chicago, led by Professor Eben Alsberg, has developed a process for three-dimensional printing of biological tissues without scaffolds, using "ink" containing only stem cells.

This technique allows you to create three-dimensional fabrics without classical scaffold support by using a container with hydrogel balls, in which printing is carried out directly.

Micron-sized hydrogel beads allow the 3D printer tip to move and release cells with minimal resistance. They also hold the cells during printing, preserving the necessary shape of the future tissue.

At the end of the printing process, the matrix of hydrogel beads is exposed to ultraviolet radiation, which binds them together, allowing the printed cells to connect with each other, mature and grow inside the stabilized structure. The hydrogel space surrounding the cells is freely passable and can be replaced if necessary. The hydrogel balls can be carefully removed or monitored for their destruction, resulting in an undamaged tissue. 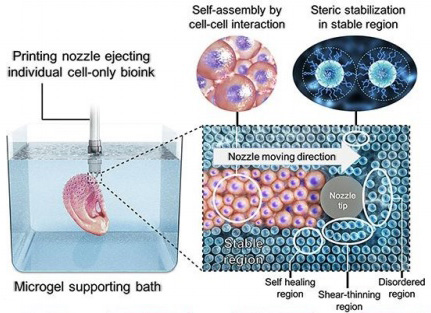 In their experiments, the researchers used stem cells, as they can quickly differentiate into a wide variety of other cell types. Using the developed technology, they printed the cartilaginous tissue of the ear and a femur the size of a mouse. Thus, the Alsberg group demonstrated the possibility of organizing and assembling tissue from individual cells using a hydrogel platform. This technology is suitable for creating more complex functioning tissues that can be used to test drugs and create models.

Aminat Adzhieva, portal "Eternal Youth" http://vechnayamolodost.ru based on the materials of UIC Today: 3D printed tissues and organs without the scaffolding.