Mammoth Rebirth: Have you thought about the consequences?

The restoration of extinct species can lead to unpredictable consequences

Alexey Gilyarov, "Elements"The problem of restoring recently extinct (and in fact, exterminated by man) species, such as mammoth, marsupial wolf, wandering pigeon and others, has become intensively discussed in the press in connection with noticeable progress in molecular biology.

From these animals there were tissue samples from which DNA can be extracted, the location of the genes can be found, and then these genes can be injected into the egg of a living, possibly related species. The very method of restoring extinct species causes a highly skeptical reaction of specialists, but in the press (not strictly scientific) environmental, ethical and even legal problems that may arise when releasing restored species are already being discussed.

In one of the recent issues of Science, two publications appeared at once, in which the problem of "de-extinction" is discussed, which literally means "the abolition of extinction" or even "the reversal of extinction". We are talking about the incessant conversations in scientific, and mainly in near–scientific circles, that some relatively recently extinct (often as a result of direct human extermination) animal species can be returned from oblivion, because in their remains that have come down to us, tissues have been preserved from which DNA can be extracted and the genome decoded. The mammoth is most often mentioned in this connection (its tissues are preserved in permafrost) and the wandering pigeon (pieces of tissue have been preserved in numerous stuffed animals stored in various museums around the world).

However, one of the publications (Sherkow et al., What If Extinction Is Not Forever? // Science. 2013. V. 340. P. 32-33. it begins with a story about a thylacine – a "marsupial wolf", or, as it is called in English, "Tasmanian tiger" (Tasmanian tiger). In fact, this animal rather resembled a medium–sized dog (the author of these lines was lucky enough to see a stuffed thylacine in the Paris Museum of Natural History), but not a wolf, and even more so - not a tiger, the similarity with which is manifested only in transverse dark stripes. 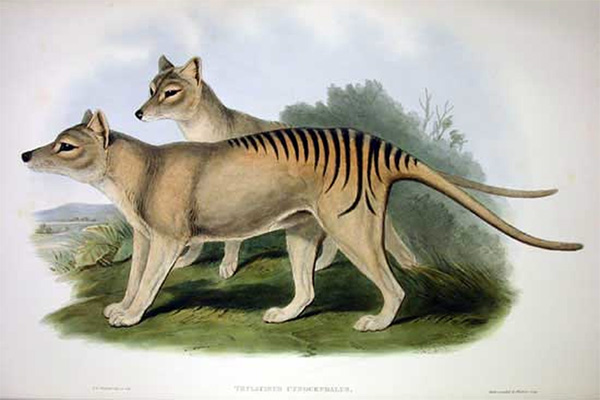 Thylacine (marsupial wolf), formerly lived on the island of Tasmania. The species was completely exterminated by humans by the 1930s.
Lithograph by John Gould (1804-1881) from the album: "Mammals of Australia". V. I. Plate 54. From the website en.wikipedia.orgOn the Internet, you can find a video of a thylacine running around a cage (the shooting dates back to the 1930s).

Apparently, it was during these years that the last thylacines, representatives of a separate family of marsupials, were completely exterminated by man.

The habitat of this animal once covered Australia, partly New Guinea and Tasmania. But then, back in the prehistoric era, the marsupial wolf disappeared everywhere except Tasmania, was replaced by dingo dogs imported by settlers. The Europeans who settled Tasmania declared war on thylacine. It was believed that this predator causes great harm to sheep breeding, and also eats hunters' prey from traps, while often falling into them himself. By the 1930s, thylacines were completely exterminated in nature, and the last animal living in captivity, in a private zoo in Hobart, died of old age in 1936.

The project of decoding the thylacine genome was adopted by the Australian Museum in Sydney back in 1999, but the first successes were achieved only in 2008, when the gene extracted from a pickled cub was able to be made to work in a mouse embryo. The results of this study are published in the public journal Plos ONE. Obviously, this result, which certainly deserves attention, in itself does not give any hope for cloning thylacine, especially since there are no currently existing species that would be close relatives of this extinct beast. Experts in the field of molecular biology and genetics do not see any possibility to restore thylacine from oblivion. Even if we decode the entire genome, it is not clear how certain genes will work. In addition, the egg of a living animal, into which other people's genes will be inserted, is of great importance.

Despite the frankly fantastic nature of the restoration projects in the flesh and blood of extinct animals, in the press, including in the mentioned article in Science, the risks associated with the release of animals obtained by cloning, and those ethical and even legal problems that may arise in this case, are discussed in full, point by point. To the author of this note, such discussions seem absolutely far-fetched and not worthy of attention.

The title of another publication in the same issue of Science is very pretentious – "Fluttering out of the ashes?" (Richard Stone, "Fluttering From the Ashes?”). It is about attempts to restore the wandering pigeon (Ectopistes migratorius). This pigeon, once widespread in the deciduous forests of North America, formed huge breeding colonies and flocks. Birds could not even be shot, but caught with nets. The mass extermination of them simply for meat (and sometimes for fertilizers) led to the fact that in the period from 1800 to 1870 the number of the wandering pigeon was rapidly and steadily declining. By the beginning of the 20th century, birds had disappeared into nature, and in 1914, the last pigeon that lived in captivity died at the Cincinnati Zoo.

A pair of wandering pigeons. A drawing from the Richard Stone article under discussion. Fluttering From the Ashes?Enthusiasts seeking to resurrect the wandering pigeon hope to use the egg of the largest species of American pigeons – the striped-tailed pigeon (Patagiones fasciatus).

Researchers have sequenced about half of the genome using the remains of tissues from stuffed three wandering pigeons, but hope to decode the entire genome soon. The next step will be "genome editing" – the genes of the wandering pigeon will be gradually introduced into the egg cell of the striped-tailed pigeon. The question of whether it will be possible to get a pigeon that looks more like a wandering one than a striped-tailed one remains open. But it is emphasized that in the museums of the world there are about 1.5 thousand stuffed wandering pigeon. Therefore, they say, it is possible to gain the necessary genetic diversity of the restored group of pigeons. The authors further discuss the risks of releasing a group of wandering pigeons into nature – whether it will become an invasive, aggressive species that causes considerable harm, as well as the problem of how to train them to migrate.

These arguments against the background, to put it mildly, of the contrivance of the project and the dubious possibility of obtaining at least one individual seem devoid of special meaning. In addition, as Susan Haig, president of the American Ornithological Society, emphasizes, the best candidates for restoration among birds may be species that have recently become extinct, characterized by a simple mating system, a large clutch size and minimal parental care for chicks. A wandering pigeon does not meet these conditions in any way.