Has the "innovation reform" failed?

Innovations in Russian: 10% and a "red flag"
Michael is found, STRF.ruOver the past eight years, against the background of talk about innovations from the highest tribunes, the state has not only failed to create really working institutions for the development of an innovative economy, but has consistently destroyed one of them. 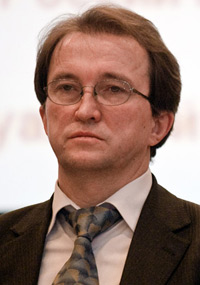 This is the opinion of the director of the Republican Research Institute of Intellectual Property, Doctor of Law, Professor, State Adviser of Justice of the III class Vladimir Nikolaevich Lopatin.

At the state level, Russia's transition to the path of developing an innovative economy was talked about in full voice back in 2001, but the who is still there: more than 60 percent of Russian exports are still raw materials. In your opinion, has the "innovation reform" failed?"I'm afraid you're right.

In 2001, we heard from high tribunes that it was necessary to move from exporting brains to exporting technologies, that this was the only way to save Russia and that a single authority responsible for the development and implementation of innovation policy in Russia was needed, and a single authority responsible for the education and functioning of this system should be appointed. The Ministry of Industry, Science and Technology was established. A wonderful decision was made – to combine science and technology together! But after that, Mr. Gref's ministry initiated an administrative reform. As a result, science and industry and technology were torn apart. The industry was removed and given to Rosprom (today the Ministry of Industry and Trade). The technology was also given to other agencies. And science was combined with education. Interdepartmental disunity remains between the ministries, contradictions in interests remain. The powers of the main department in the country for innovation policy still remain with the Ministry of Education and Science, but this department clearly does not cope with the role of coordinator.And what are the main results of this reform in practice, for example, in the field of creating the so-called "innovation infrastructure"?

Firstly, we have made the eternal mistake of Russia here, when, studying foreign experience, we take from all over the world what works in it and try to apply it in one particular country. But there is no such thing anywhere! In each country, taking into account classical traditions, established practices, social and economic opportunities, certain elements have developed and are successfully applied. Technoparks work somewhere, business incubators work somewhere, technopolises and technopoles work somewhere (if we take France and Japan), science cities work somewhere, but all together in one country does not work anywhere! Each department, having spent the appropriate funds, has studied this experience in one way or another and is trying to put it into practice, simply mastering money. The result is a vinaigrette, a combined hodgepodge. But there is no system.

Secondly, in Russia, there is still no unified legal regulation of the development of innovation infrastructure in particular and innovation activity in general. For 10 years of conversations, not a single federal law has been adopted that would enshrine the concept of "innovation activity" and disclose its content. If federal ministers do not do this, then, accordingly, who is responsible for it? First of all, the land on which Russia stands: regions. Today, 62 constituent entities of the Russian Federation have adopted such laws. But if we make a comparative analysis, they contradict each other. A reasonable question arises: is it possible in such conditions to build a single intellectual property market and a single innovation-type economy throughout the country? Absolutely not. And there is still no federal law on innovative infrastructure either…

20 percent for innovationBy the way, according to experts, it is precisely because of interdepartmental inconsistency that the government decree adopted with great difficulty regulating the procedure for disposing of rights to the results of scientific and technical activities does not actually work.

Do you share this point of view?– This decree of the Government of Russia No. 685, as well as the fourth part of the Civil Code of the Russian Federation (Chapter 77 "On Unified Technology", – ed.), assumes a beautiful and competent scheme based on the experience of innovative development of Western countries.

The results of R&D funded from the budget are assigned to the contractor – except in cases when the developed technology falls under state secrets or is related to the defense, security or health protection of citizens. Great scheme! But clear criteria for classifying a particular technology as defense (military), dual-use technologies or purely "civilian" are not established even at the subordinate level (there is no corresponding government decree), not to mention the legislative one. Everything remains at the discretion of officials. The current situation needs to be changed urgently.Skeptics believe that the new legislative norm will not work either.

The Duma is considering the possibility of allowing state institutions of science and education to establish small innovative enterprises. It is known that the Ministry of Finance insists on adjustments to this project …– Indeed, as an anti-crisis measure, not so long ago the Ministry of Education proposed to restore the norm allowing state educational and scientific institutions to create economic societies and use the funds received from their innovative activities.

But the Ministry of Finance insists that it is not in the same one hundred percent volume. And now there is a "bargain": 15, 20, 30 percent ... 100 percent should be left, and without any conditions!

Unfortunately, in the minds of our officials, especially the Ministry of Finance, there is devastation, multiplied by the consolidation of Russia's status as a raw power. The Ministry of Finance can be called one of the main anti–innovation departments of our country - this department is used to "working on raw materials", implements its interests, but not national interests.

The Ministry of Finance, apparently, does not want to understand the obvious: neither ministries nor departments on behalf of the state can be effective owners of promising developments – only universities and research centers themselves.

As far as I know, the Republican Research Institute of Intellectual Property has developed a certain model of technology transfer from state institutions of science and education to the private sector. What is its essence?– And in the current conditions it is necessary to work somehow.

We propose to implement technologies through so-called "contractual precedents". Universities, as holders of property rights to technologies, transfer this right to the author (or authors) under a license agreement. The author, in turn, acts as the founder of the future small innovative enterprise being created and acts as an intermediary between the university and the investor, conducts appropriate negotiations. We have worked out this model, and today we are launching it in the real sector of the economy, both within the Irkutsk Technopark and the Baikal Nanotechnology Cluster being created.

Foggy export of NanotechSpeaking of nanotechnology.

I remember you said that Russian innovations in the field of "nano" have a very dim future. Could you clarify your position?– Unfortunately, we lost the fifth technological revolution.

A revolution that launched the process of creating a new sector of the economy related to informatization. Today we must honestly admit that our country is mainly a consumer of computer hardware, software and computer infrastructure.

Today, the sixth technological revolution is already underway in the world, a breakthrough in the field of nano- and biotechnologies is beginning. However, our potential, our ideas, knowledge, our technological base, what we could in principle enter the world markets with – all this is already furnished with "red flags" of foreign patent holders. By the end of last year, 10,000 patents in the field of nanotechnology were issued worldwide, of which 2,030 were issued in Russia: 2,000 to foreigners, and 30 to Russians. At the same time, the number of Russian applications for foreign patenting has fallen by an average of six times! This means that we will have to pay an increasing share of the 130 billion budget money allocated to the state corporation Rusnano to foreigners who have come to our market.

The state allocates huge amounts of money for R&D, but does not allocate funds for securing rights. In Soviet times, it was assumed that each R&D contract assumes a share of ten percent of the volume for securing rights, today it is zero. These funds are allocated separately, and then not by every ministry and department.

Potential markets for our technologies are not occupied by us, we are not equipped. Practically no funds are allocated for studying the market where we come with our products, studying the legal conditions in which we will sell. Foreigners today know our market, our legislation much better than we do! I'm not talking about the legislation of foreign countries. If the situation does not change radically, we will also lose the sixth technological revolution.