Scientists at the Salk Institute for Biological Research (La Jolla, California), working under the guidance of Professor Andrew Dillin, have found that slowing down the aging process in mice predisposed to Alzheimer's disease prevents the death of brain neurons.

The results of the work published in the December issue of the journal Cell in the article "Reduced IGF-1 Signaling Delays Age-Associated Proteotoxicity in Mice" are another piece of the puzzle, which the authors have been working on for quite a long time. Ultimately, they want to find out whether the development of Alzheimer's disease in old age is the result of the aging process itself, or whether it takes a long time for the accumulation of beta-amyloid aggregates causing the disease.

As part of their latest study, the authors tried to influence the onset of symptoms of Alzheimer's disease by modulating the aging process. To do this, they slowed down the aging of genetically modified mice predisposed to Alzheimer's disease by reducing the activity of the signaling mechanism mediated by insulin-like growth factor-1 (IGF-1). This mechanism plays a key role in regulating life expectancy and prolonging youth in many organisms, including worms, flies and mice, and is also associated with longevity in humans. As a result, the life expectancy of experimental animals increased by 35% compared to the life expectancy of normal mice in the control group.

After that, in order to establish what exactly is the cause of the development of the disease: the aging process itself, or the passing of time, the authors subjected the animals to a set of behavioral tests. At the same time, chronologically old, but biologically young mice looked almost normal compared to animals of the same age, but aging at a normal rate and having symptoms of Alzheimer's disease.

Distinct behavioral differences between normal mice and long-lived animals were recorded already at the age of nine months. However, when analyzing the state of animal brain tissues, the experimenters were waiting for a big surprise.

One of the characteristic signs of Alzheimer's disease is the accumulation of toxic aggregates of beta-amyloid plaques in the brain tissue. Perhaps the synthesis of this protein also occurs in the normal brain, from where its excess is successfully excreted by healthy cells, whereas in Alzheimer's disease the brain is unable to cope with the accumulation of beta-amyloid. The same is observed in the mouse model of the disease, genetically programmed for excessive synthesis of toxic protein. 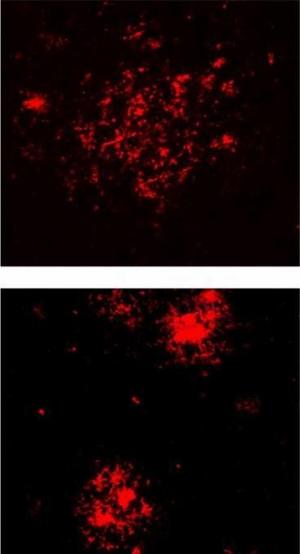 Despite the fact that in long-lived animals, cognitive function and behavior disorders characteristic of Alzheimer's disease began to manifest only at a very old age, their brains were literally stuffed with tightly packed plaques.

On the brain slices at the top there are amyloid plaques dispersed over the brain tissue in a control group of old mice genetically prone to Alzheimer's disease; at the bottom there are huge accumulations of beta–amyloid in mice in which, as a result of another genetic modification, the IGF–1-mediated signaling mechanism is inhibited.

According to one of the authors Ehud Cohen, it was previously assumed that amyloid plaques are the cause of the development of Alzheimer's disease, but the results confirm a new theory according to which they, on the contrary, perform a protective function. Apparently, as brain cells age, they lose the ability to neutralize toxic beta-amyloid fibers by packing them into dense aggregates.

According to the results of an earlier work by the same group of researchers who used roundworms to study the effect of the aging process on protein aggregation, large aggregates of beta-amyloid are much less toxic than fibers consisting of it. However, the fact that "the brain of worms is very different from the brain of mammals, deterred the authors from making hasty conclusions.

It is also interesting, confirmed by three independent studies, that many of the centenarians who maintain a sane mind throughout their lives are carriers of mutations of genes encoding components of the IGF-1–mediated signaling mechanism - the same mechanism that the authors modified to create long-lived mice.

Experts believe that this work is a great achievement in the field of studying aging processes, as it confirms the long-cherished hypothesis that genetic and pharmacological effects, the purpose of which is to increase the duration and quality of life, can significantly delay the development of a number of serious human diseases.