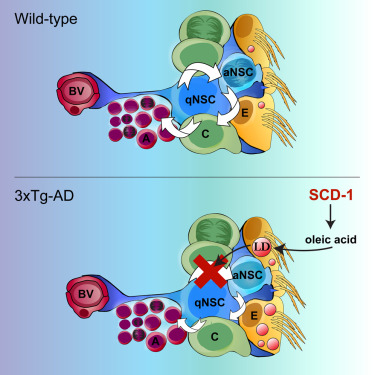 Diagram from an article in the journal Cell Stem Cell:
Hamilton et al. Aberrant Lipid Metabolism in the Forebrain Niche Suppresses Adult Neural Stem Cell Proliferation
in an Animal Model of Alzheimer's Disease – VM.Later, scientists compared brain samples of nine patients who died of Alzheimer's disease and five people who died without this disease.
It turned out that there were significantly more "fat droplets" in the brains of people affected by Alzheimer's disease. The researchers were able to determine the type of these fat deposits. It turned out that these are triglycerides enriched with special fatty acids, which can also be found in animal fats and vegetable oils.
"We found that these fatty acids are produced by the brain and that they accumulate slowly with normal aging. However, this process is significantly accelerated in the presence of genes that predispose to Alzheimer's disease," said the author of the study, Professor Carl Fernandez from the University of Montreal (in a press release Alzheimer's disease is thought to be accelerated by an abnormal build–up of fat in the brain – VM).
Experiments have shown that fatty acid deposits accumulate very quickly in the brains of mice predisposed to the disease – in just 2 months.
"Thus, we believe that the accumulation of fatty acids in the brain is not a consequence, but rather the cause or catalyst of the disease," says Professor Fernandez.
Inhibitor drugs tested for metabolic diseases (such as obesity) are able to block the activity of the enzyme that produces these fatty acids and stop their accumulation. Tests on mice predisposed to the disease have already confirmed this.
Portal "Eternal youth" http://vechnayamolodost.ru
01.09.2015
Found a typo? Select it and press ctrl + enter Print version