A new approach that will lead to a complete cure for HIV infection can be developed based on the results obtained by a group of French scientists. They claim to have discovered a molecule by which HIV reservoir cells can be recognized. The article Descours et al. CD32a is a marker of a CD4 T-cell HIV reservoir harboring replication-competent provisions published in Nature.

Today, a person infected with HIV can hope for a fairly high quality of life and for an almost normal duration. But all this is provided that he will take medication for life. Without treatment, a person will live after infection for about ten years, or even less. Highly active antiretroviral therapy (HAART) begins to be taken as soon as the number of T-lymphocytes decreases to a certain amount, and is taken for the rest of their lives. As a rule, the patient takes three drugs at the same time, targeting three different components of the virus. However, the HIV virus can quickly mutate and acquire resistance to drugs, and then they have to be replaced with new ones (and their list is not endless), and medications can cause quite severe side effects in the patient.

Why can't you just stop taking medications? Because after that, the virus will surely return, T-lymphocytes will begin to die again, immunodeficiency will increase, infections will overcome. The reason for the return of the virus is that it manages to create reservoirs for itself, in which it can be at rest for years. Reservoirs are usually long–lived lymphocytes (for example, memory cells) or even, for example, brain or intestinal cells.

What is a virus at rest? In fact, it is a fragment of viral DNA embedded in the DNA of the host cell. Actually, the genome of the HIV virus is represented by a single-stranded RNA molecule, but in this form it would not live long, since such RNA is unstable. Therefore, the virus creates a stable double-stranded DNA copy and embeds it into the genome of the host cell. If it is a resting cell that does not divide itself, the viral DNA will not replicate either. There is no synthesis of viral proteins in such cells. The drugs included in the set of VAART, as a rule, are aimed at viral proteins, the human immune system can recognize and kill cells in which viral DNA is replicated, and neither one nor the other occurs in reservoir cells, and it is impossible to find and destroy them.

To date, with a greater or lesser degree of confidence, we can talk about literally several cases of complete cure from HIV.

The very first time–tested case of this kind is the cure of Timothy Brown, the so-called "Berlin patient". Ten years after his HIV diagnosis (in 1995), he developed acute leukemia, from which conventional anti-cancer drugs did not help. In such cases, patients undergo hematopoietic stem cell (bone marrow) transplantation, and a donor was found for Brown who is genetically resistant to HIV (there are quite a lot of such people among Europeans, they have a mutation in one of the coreceptors necessary for the virus to enter the lymphocyte). Due to severe chemotherapy, Timothy Brown was forced to abandon antiretroviral therapy, but it turned out that HIV had disappeared anyway. Since then, he has been examined inside and out, up to a brain biopsy, but no trace of the virus has been found, despite the fact that he stopped taking antiretroviral therapy. Most likely, the destruction of the reservoir cells took place in two stages. At the first stage, in preparation for transplantation, special drugs kill the patient's own bone marrow and immune system cells. A significant part of the reservoir cells died with them. In the second stage, the new bone marrow and new cells of the immune system attack everything that remains of their predecessors, considering the remaining cells as strangers. At this stage, the remaining reservoir cells die. In fact, if stem cells are transplanted from a genetically stable donor, complete elimination of the virus is not necessary. Even if the virus remains dormant somewhere, it will not be able to infect new resistant T-lymphocytes, and no immunodeficiency will occur.

Much more interesting in this sense is the case of two comrades in misfortune Timothy Brown, who so far prefer to remain anonymous. They were also forced to transplant blood stem cells against the background of HIV, but there were no genetically stable donors for them (the donor must match many genetic traits, and for some people they cannot be found at all). These patients tolerated milder chemotherapy more easily, and they did not have to give up VAART. In these two patients, the virus disappeared only 10 months after transplantation, which indicates the crucial role of the graft-versus-host reaction in the destruction of reservoir cells.

However, hematopoietic stem cell transplantation is a dangerous event, and can only be used in cases of immediate threat to life, for example, in cases of proliferative blood diseases that do not respond to chemotherapy. In a situation where people, taking VAART, live a full life of normal duration, no one will transplant stem cells just to cure them of HIV. Even if it becomes easier for some of the patients, on average the quality of life and its duration will only decrease. And it is not economically profitable at all.

The news about children infected with HIV in the process of being born looked more promising. One such child was given antiviral medications in the first hours after infection, and then, about a year and a half later, the mother stopped giving the child medications. When doctors were able to examine the child again a year later, they found no signs of infection. Then it seemed that if you start therapy very, very quickly after infection, the reservoirs will not have time to form, and the disease will be defeated completely. However, by about the age of four, the disease returned.

Thus, it can be seen that the main problem in the complete cure of HIV is created by reservoir cells in which the virus is at rest, but at any moment it can activate and begin to infect lymphocytes that have managed to multiply while the patient was taking medication.

To solve this problem, scientists have attempted to activate reservoir cells with specially selected substances so that the virus begins to multiply in them. According to their assumptions, such cells would have to become a well-visible target for the immune system, and it would destroy the cells and the virus along with it. And, although the cells were activated, the immune system was in no hurry to destroy them.

In the work with which we started this article, scientists have found the answer to the question: how to distinguish a reservoir cell from an ordinary healthy cell by external signs. They used a labeled virus to know for sure which cell has viral DNA and which does not. And they compared infected dormant cells with uninfected ones. They found one surface protein, CD32a, which was expressed in dormant but infected cells. It is noteworthy that it was not expressed in lymphocytes in which the virus was active. Using antibodies against CD32a, the authors were able to isolate reservoir cells from the blood of sick people. They believe that they can now distinguish a cell infected with an inactive virus from a healthy one, and plan to use this to create a drug that will destroy such cells. 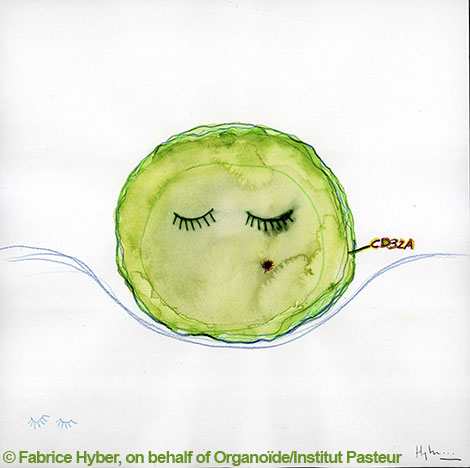 Figure from the CNRS Discovery of an HIV reservoir marker press release:
A new avenue towards eliminating the virus – VM.

There is another promising direction in the development of a method of "lifelong" cure of the HIV virus. AIDS, a disease caused by HIV, occurs when there are not enough T-lymphocytes left in the body to contain infections. Methods of autotransplantation of cells are actively developing now, when cells (for example, blood stem cells) are taken from a patient, genetically modified, and injected back into the patient. If there are enough lymphocytes in the patient's body, modified according to the example of people with genetic resistance to HIV, then the patient will feel fine, although the virus will remain in the body.