A new level of bioprinting

Specialists create artificial organs and tissues that can be used to develop and test new drugs, repair damaged tissues and even replace entire organs in the human body. But modern technologies did not allow creating complex forms and achieving sufficient viability of the embedded cells.

Researchers from the Federal Polytechnic School of Lausanne, Switzerland, and the Medical Center of Utrecht University, the Netherlands, have developed a method for quickly printing structures with a complex configuration in a hydrogel with stem cells. 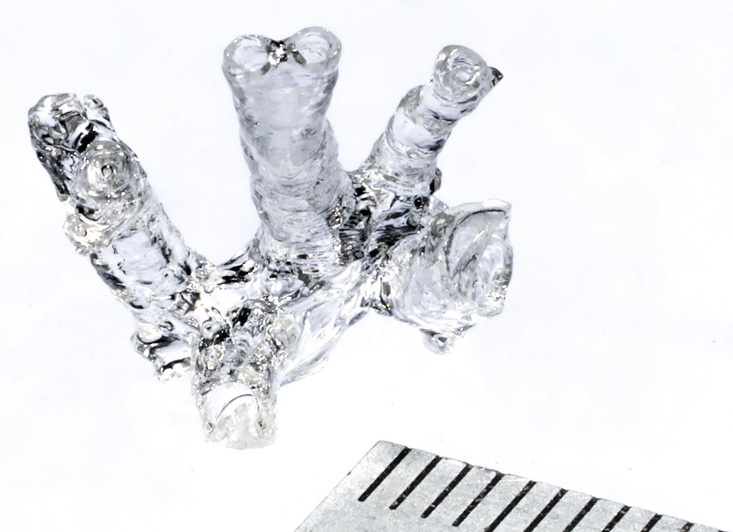 The resulting tissue can then be vascularized by adding endothelial cells. The technique will allow cell engineering specialists to quickly create qualitatively new personalized and functioning organs.

The seal of the femur or meniscus

To create the tissue, the researchers light a rotating tube filled with stem cell hydrogel with a laser. The fabric is created by focusing light energy in certain areas, which then harden. After a few seconds, a complex three-dimensional figure appears suspended in a gel. This process has virtually no effect on the stem cells in the hydrogel. Next, the researchers inject endothelial cells to vascularize the tissue.

The authors demonstrated that in this way it is possible to create a tissue structure with a length of several centimeters – this is a clinically significant size. As an example, a heart valve, a meniscus and a part of the femur with an anatomically complex shape were printed. They were also able to create interconnected structures.

Unlike conventional bioprinting – a slow layer–by-layer process - this technology is fast and provides greater design freedom without compromising the viability of stem cells.

Replication of the human body

The work of researchers is a real breakthrough in three–dimensional printing. The characteristics of human tissue largely depend on the complex extracellular structure, and the ability to reproduce this complexity can lead to a number of real clinical applications. Using this technique, laboratories can mass produce artificial tissues or organs at an unprecedented rate. This is very important for testing new drugs in vitro and will help to abandon animal testing, as well as reduce costs.

The authors write that the method they developed is inherently scalable for mass production and can be used to produce a wide range of cell tissue models, medical devices and personalized implants.

The researchers plan to expand the range of applications of this innovative technique.