With the help of brain organoids, scientists have found that mutations in the CHD8 gene disrupt the balance of neuron production, which leads to autism, reports Austrian Institute of Science and Technology. The results of the work are published in Cell Reports (Villa et al., CHD8 haploinsufficiency links autism to transient alterations in excitatory and inhibitory trajectories).

Several hundred genes are associated with autism spectrum disorders. In addition to the characteristic symptoms, such as difficulties in social interaction and communication with other people, as well as repetitive stereotypical behavior, patients with mutations of the CHD8 gene often have mental retardation and macrocephaly – an unusually large brain. Exactly how CHD8 causes these symptoms has been unclear for a long time.

Since CHD8 mutations affect the brain at a very early stage of its development, it is difficult for scientists to get a complete picture of the disease. Therefore, in recent years, many researchers have used mice as model organisms to better understand what is happening. But the mice with the CHD8 mutation barely showed the same symptoms as humans.

As a new model, scientists used organoids. These simplified miniature versions of organs are made from stem cells that can transform into almost any other type of cell. By creating the right conditions and entering the necessary data at the right time, the researchers were able to simulate developmental processes to create basic versions of lentil-sized brain tissue. 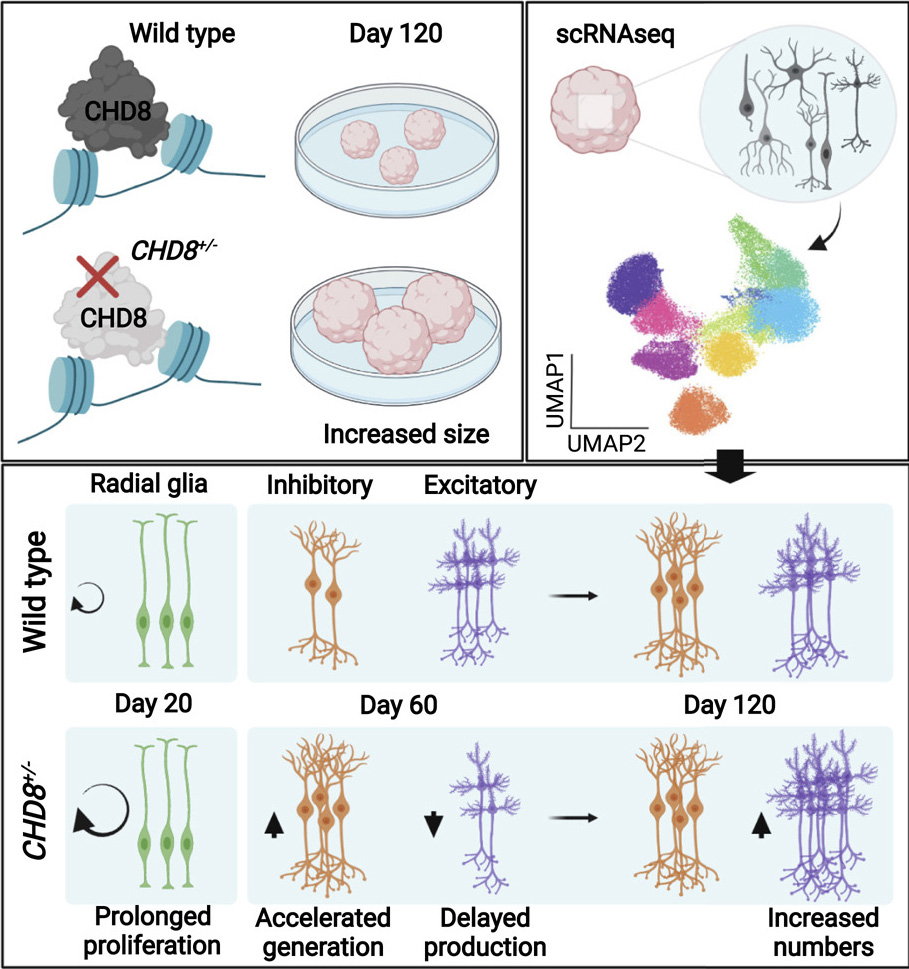 In Petri dishes, the team created brain organoids with and without CHD8 gene mutations. After a while, they saw that the mutant organoids were much larger. This was the first evidence that the model was working. As in patients with the CHD8 mutation, the organoids showed signs of excessive brain growth.

After getting an overview of all cell types in the organoids, the team noticed that the mutant organoids started producing a certain type of neurons –inhibitory neurons – much earlier than the control group. However, later the so-called excitatory neurons appeared. In addition, mutant organoids produced much more proliferating cells, which subsequently produced more neurons of this type. In general, the scientists concluded, this leads to the fact that they are significantly larger than organoids without CHD8 mutations correlating with the patient's macrocephaly.