Diseases have matured during evolution

Each human cell can be compared to a huge factory, where more than twenty thousand gene workers together do one common thing. The products of gene labor – proteins – are used both in the construction of the plant itself (such proteins are called structural), and as tools of labor – such as, for example, a variety of enzymes involved in myriad chemical reactions in cells. By the way, there are much more artisans making tools than brickmakers, concrete workers and even builders.

There are separate structural elements at the plant, proteins-bosses and proteins-foremen, launching various processes, numerous systems that support the life of the plant and allow it to function as prescribed by the genetic code. If we continue the analogy, then the whole organism can be represented as a huge state with a diversified industry, regulatory bodies and institutions, and even a large army of officials.

True, no state in the world can even come close to comparing the complexity of its device with some "primitive" fish from the Jurassic period.

Not all workers are born perfect: mutations inevitably appear in the genes during reproduction. Some of the workers do not have a hand, someone has a thorn in his right eye, someone was born hunchbacked. All these defects inevitably affect the quality of the product they produce – unlike humans, genes cannot voluntarily switch to the production of something that their limited abilities do not harm.

However, often plants and whole organisms can continue to work even being built from, relatively speaking, triangular bricks – not to mention the loss of some signaling function in the cell. In these cases, they talk about congenital diseases. Today, about one and a half thousand genes have been catalogued, certain mutations of which lead to various phenotypic changes in the body, but still allow a person to be born.

Tomislav Domazet-Losho and Ditard Tautz from the Institute of Evolutionary Biology of the German Max Planck Society wondered which genes in human DNA are most susceptible to such changes. Where, in which workshops of our cell factories do the workers who produce the most waste work? And the most interesting thing is – which stages of biological evolution have given us the most bracho-makers?

To deal with this issue, the scientists applied the methodology of "philostratigraphy" developed by them. In recent years, the genomes of organisms located on various branches of the evolutionary tree have been deciphered, and by the presence of similar genes on different branches, it has become possible to track at what level a particular gene appeared. Modern data allow Domazet-Losho and Tautz to trace 19 such strata – starting from bacteria, to multicellular, mammals and primates, up to man himself. The results of such an analysis have been accepted for publication in Molecular Biology and Evolution; scientists have not made any differences between diseases caused by damage to one gene and polygenic causes.

(Hereditary diseases and gene diseases are a group of diseases resulting from DNA damage at the gene level. The term "gene diseases" is used for diseases associated with a single gene").

Different genes of our organism arose at different stages of evolution, and most of them were present even in the most distant ancestors of the "crown of creation". It's hard to believe, but more than half of our genes in one form or another were still present in unicellular organisms, and most of this half arose even before the appearance of nuclei in cells. But the whole development of mammals added only about 10% of the total number of genes in our body.

Simple logic suggests that from the most ancient organisms, man got the genes responsible for the most basic cellular processes. Therefore, mutations in them should lead to defects incompatible with life, and they cannot fall into the category of "congenital", assuming this very birth. In addition, these genes have been influenced by the selection process for billions of years and could somehow "settle down" in a form for which mutations are not so important.

At the same time, the genes that separate humans from monkeys are not much of a difference in the global evolutionary picture, are not so important. Well, what prevents a person from being born covered with a skin or incapable of mathematical analysis? And what is a million years compared to billions? Therefore, scientists believed that among the novice genes there would be a greater proportion of those that lead to congenital diseases.

It turned out that everything is quite the opposite – genetic diseases are more often associated with ancient genes. As the analysis of almost two thousand genes that cause various congenital diseases shows, we are still sick because of the genes inherited from our most distant ancestors. And the innovations that nature first implemented in mammals almost never lead to genetic diseases.

At the same time, we are not talking about absolute values, but about relative ones. There are indeed more ancient genes, but if a little less than a thousand of the 8 thousand genes of the oldest philostratigraphic level are associated with genetic diseases, then among the two thousand genes that appeared over 100 million years of development of placental mammals, there are less than a dozen such "pathogenic" genes. Most of all, the proportion of such genes among those relics that we inherited from precellular organisms and the last precursors of multicellular organisms that flourished during the famous "Cambrian explosion". 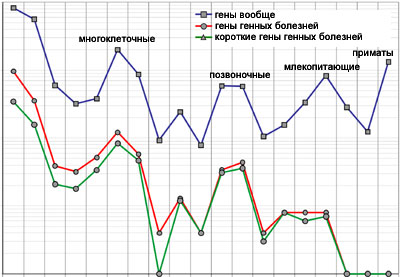 The figure shows the number of genes at different levels of philostratigraphy, arranged horizontally. Blue shows all the genes of the human body, red and green – genes associated with genetic diseases. The levels corresponding to individual peaks are signed. // Domazet-Loo & Tautz / Molecular Biology and Evolution.

The authors do not draw any confident conclusions from their unexpected result, confining themselves to the remark that hereditary diseases seem to be an inevitable component of life itself. In addition, they note, their work makes even more obscure the biological purpose of those genes that have appeared in our last millions of years – for example, those one and a half thousand that are characteristic of primates.

However, the work also has an unusual practical sound. Now experiments on mice are considered the "gold standard" in the research of gene diseases. But if most of them can be modeled on nematodes and fruit flies, why waste time, money and effort working with mammals? According to the authors, if we are not talking about a biological function, but about purely theoretical issues like the causes of genetic diseases, it is better to work with those model organisms in which these diseases have arisen.