American gerontologists have tested how one and a half hundred drosophila lines react to calorie restriction. It is believed that this technique prolongs life, but not all flies really began to live longer. In addition, their long life was not always accompanied by an improvement in health and physical endurance. Scientists have found that the effect of diet on life expectancy and health are two separate mechanisms for which different genes are responsible. One of these genes was named after the sculptor Daedalus, and the second in honor of Decima, the Roman goddess of fate.

The study is published in the journal Current Biology (Wilson et al., GWAS for Lifespan and Decline in Climbing Ability in Flies upon Dietary Restriction Reveal decima as a Mediator of Insulin-like Peptide Production).

The most reliable way we know of prolonging life (at least in animals), which allows us to do without pills, is food restrictions. Different methods prescribe to reduce calorie intake or absorb less of certain substances (in different diets, these may be proteins or carbohydrates).

However, not all experiments with diets manage to prolong the life of experimental organisms. Of course, this can be attributed to differences in methods. But it is possible that the explanation lies in genes: each laboratory works with its own line of animals that are related to each other, but may be very different from individuals of the same species from neighboring laboratories. And if the genotype really determines the reaction to food restrictions, then they may not be effective for all people.

Kenneth Wilson from the California Institute for Aging Research named after Buck and his colleagues used a collection of 161 lines of fruit flies to find out how each of them reacts to calorie restriction. Scientists were interested in two aspects of the vital activity of flies: life expectancy, on the one hand, and physical activity, on the other. The fact is that it is still unclear whether the same or different mechanisms ensure a long life and a healthy life. And it may turn out that calorie restriction prolongs existence, but does not add health (we have already talked about such a study on lemurs), or, on the contrary, makes the body more active, but shortens the days of life.

To begin with, the researchers measured the life expectancy of 161 lines of flies in conditions of full nutrition (ad libitum) and with calorie restriction. It turned out that diet affects animals differently depending on their genotype. The authors of the work traced a pattern: the longer the line lived on its own, without intervention, the weaker the calorie restriction affected it. Among the long–lived lines, the diet was useful to less than 46 percent, and among the short-lived ones - as much as 82 percent.

The researchers then assessed the relative health of the flies. In humans, one of the measures of health is the speed of walking, the authors of the work considered the "climbing test" to be an analogue of this parameter for flies: flies are shaken off into the lower part of the test tube and count how many of them are able to climb back up the wall. This parameter also differed greatly between the lines: in some of them, more than half of the flies lost this ability in a week, in others they retained it for longer, sometimes up to two months. Calorie restriction extended this period in 69 percent of lines, but had no effect on 25 percent.

The number of days during which at least half of the flies in the line are able to climb the wall. Red bars – full nutrition, blue – calorie restriction.

At the same time, scientists have not found any correlation between life expectancy, health and the response to calorie restriction. It did not depend on the average length of life in any way how quickly the flies would lose the ability to climb walls – neither on a regular diet nor on a restrictive diet. Moreover, even the effects that the diet had on life expectancy and health coincided only in half of the lines. Another 14 percent of them were multidirectional, and 36 percent had at least one of the parameters not changed in any way.

After that, the authors of the work used the GWAS (genome-wide association search) method to calculate the genes that are responsible for these two effects. They managed to find two genes. Polymorphism in one of them was associated with the effect of diet on health: flies with this variant of the gene climbed the walls better with calorie restriction. He was named dls – short for daedalus, after the hero of Greek myths Daedalus. Polymorphism in the second gene allowed its carriers to live longer under the influence of diet. He was named dcma after the Roman goddess of fate Decima, who, like her Greek counterpart (Moira Lachesis), wove the thread of human destiny. At the same time, the variants of each gene affected only one of the effects of the diet, but not the other. From this, the researchers concluded that the mechanisms of life extension and health promotion are two different processes. 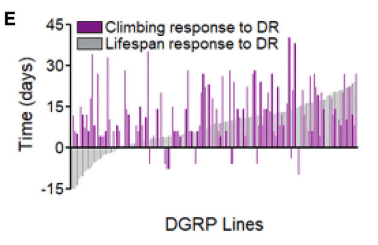 The effect of calorie restriction on life expectancy (gray) and the ability of half of the flies in the line to climb the wall (purple). Both parameters are measured in days.

It is not yet known what the dls gene is responsible for. A conservative domain was found in its structure – in other words, a site that is often found in other proteins – but its functions are unclear. But the researchers found out what the dcma gene is doing – it encodes a protein associated with insulin-like peptides. In other words, it enhances the work of the signaling pathway that reacts to food. And this path in many animals somehow shortens life.

Thus, the authors of the work demonstrated that a long and healthy life does not necessarily go hand in hand. Different genes may be responsible for them, and therefore different mechanisms. This may explain the contradictory results of experiments – depending on the gene variants carried by a particular species (or even a line) of animals, calorie restriction prolongs or shortens life and improves or worsens physical endurance. The same may be true for people. And if so, then we will have to, in addition to ways of prolonging life in general, look for separate methods of prolonging a healthy life – and it's not a fact that they will work equally for everyone.