Are mobile phones good for the brain?

Electromagnetic radiation from mobile phones can prevent senile dementia and even normalize brain functions in old age. Such conclusions were reached by American scientists as a result of long-term experiments with mice genetically predisposed to the development of a disease similar to Alzheimer's disease. 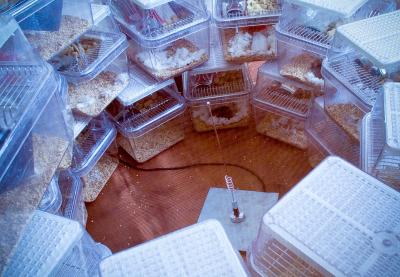 A total of 96 mice were involved in the experiment conducted by the staff of the University of South Florida under the leadership of Dr. Gary Arendash. The rodent cages were located at the same distance from the source of electromagnetic radiation, the effect of which on the animals was similar to the effect of a working mobile phone.

Some of the experimental animals were genetically predisposed to the formation of beta-amyloid protein deposits in brain tissues and cells. This process, which develops in old age, is accompanied by memory disorders and a decrease in mental abilities and is one of the signs of the development of the most common form of senile dementia – Alzheimer's disease.

Mice were exposed to electromagnetic radiation for two hours a day for seven to nine months. Then the scientists conducted a series of standard tests to assess the mental abilities and memory of rodents.

As it turned out, after prolonged exposure to electromagnetic radiation, mice genetically predisposed to the development of dementia were in no way inferior in test results to their healthy counterparts. In a subgroup of elderly rodents, in which the first signs of a disease similar to Alzheimer's disease were observed before the experiment, an improvement in brain functions was noted. In turn, healthy mice exposed to electromagnetic radiation coped with the tests even slightly better than ordinary animals of their age.

According to American researchers, the positive effect they found is associated with increased blood circulation and metabolism in brain tissues, and with a high probability can spread to people. In this regard, scientists do not exclude that long-term exposure to electromagnetic radiation may become an affordable and safe method of prevention and possibly treatment of Alzheimer's disease in the future.

A study report (Gary W. Arendash et al., Electromagnetic Field Treatment Protects Against and Reverses Cognitive Impairment in Alzheimer's Disease Mice) is published in the Journal of Alzheimer's Disease. The authors of the publication plan to conduct additional studies aimed at determining the optimal duration and intensity of electromagnetic radiation to achieve the most significant therapeutic effect.

Most biomedical research on mobile phones is aimed at assessing the impact of prolonged use of these devices on the risk of developing brain tumors. The results of long-term observations published to date are contradictory and do not allow us to unequivocally confirm or refute the existence of such a connection.